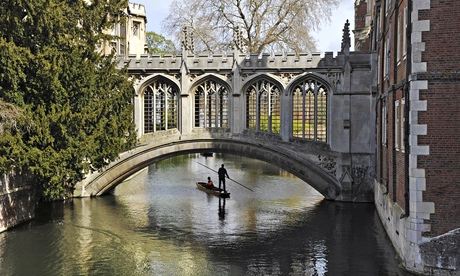 The University of Cambridge, where a prominent academic has called for researchers to boycott the publisher Elsevier over the prices of journals. Photograph: Oversnap/Getty Images

Top universities are paying too much for scores of academic journals provided by major publishing companies, an investigation has found.

Even with the hefty discounts universities earn when they subscribe to bundles of journals, commercial publishers offer worse value for money than journals published by the major non-profit professional societies, the study found. The analysis by a team of economists found that for leading universities, journals published by non-profit organisations were two to 10 times better value than those published by commercial companies, such as Elsevier, Springer, Sage, and Taylor & Francis.

Many journal publishers require universities to sign secrecy agreements that forbid them from saying how much they paid for journal subscriptions. Elsevier argues that confidentiality agreements allow them to tailor their prices to suit individual subscribers, though David Tempest, a deputy director at the publisher, told a meeting in Oxford last year that they stopped customers from driving down prices.

The economists exploited the fact that the US Freedom of Information Act trumps secrecy agreements in public contracts in most US states. They submitted requests to 55 university libraries and 12 library consortia asking for copies of their contracts with publishers. They obtained 360 contracts that shed fresh light on the prices universities pay for academic journals.

Based on the contracts they gathered, the economists worked out the average prices that publishers charged different types of institutions. Top universities, where most research is done, each paid on average more than $1.1m to access Elsevier journals. The highest price charged by a non-profit publisher, the American Chemical Society (ACS), was £62,743. The numbers cannot be compared because Elsevier publishes far more journals than the ACS.

For a fair comparison between commercial and non-profit publishers, the economists looked at value for money. One measure of a journal's quality is the number of citations it gets in the academic literature. The economists used this to calculate the cost-per-citation for each journal, which reflects the journal's value to academics.

Writing in the journal Proceedings of the National Academy of Sciences, the economists reveal that some universities have saved fortunes by bargaining hard with commercial publishers. The University of California fought for a deal that meant their subscriptions to Elsevier journals rose only 1.5% per year from 2003 to 2013. Had they accepted Elsevier's requests for an annual increase of 5%, their annual subscription would have been nearly $13m, instead of the $9.3m they agreed to pay in 2013.

"Some institutions have been quite successful in bargaining for lower prices, whereas others may not have been aware that better bargains can be reached. Perhaps this variation explains publishers' desires to keep contract terms confidential," they write. In 2011, the journal publishing divisions of Elsevier, Springer, and Wiley reported profits of 36%, 33.9% and 42% respectively of their sales revenues.

Timothy Gowers, a mathematician at the University of Cambridge, who has called for researchers to boycott Elsevier, said: "One of the main reasons that universities have for many years accepted price increases for academic journals that are way above inflation is that their contracts have been subject to confidentiality clauses. The data made public by Bergstrom et al are therefore extraordinarily welcome. They demonstrate in detail the way that the major commercial publishers have been exploiting their monopoly position, information that I hope will lead to many more libraries cancelling their Big Deal contracts."

Our editors' picks for the day's top news and commentary delivered to your inbox each morning.

Send to a friend

Short link for this page: http://gu.com/p/3q6jm

On the Guardian today